Cliquer sur les photos pour agrandir/Click on the photos to enlarge
If you want to scroll throuh all the blog, click on messages plus anciens at the end of the blog page. 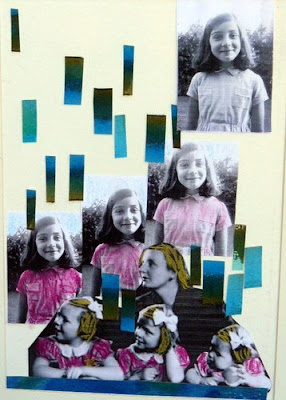 1.When I decided to make a collage about the second World War, I searched Google for pictures. Oddly, the first picture that presented itself was that of Juliana, former Queen of the Netherlands, and the three princesses.
The four photographs in the first collage, that's me. It is Anne Frank in the second collage. 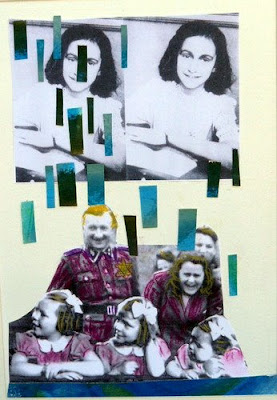 2. By chance, at the same time I was handed an old magazine. Here I found the photo of Nazi soldiers partying. I pinned a yellow star on some of them. 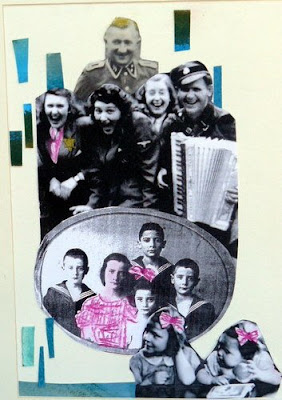 .
3.To me, the image of the music-making Nazis is alienating. The image of a Nazi is often the image of a soldier with boots and with his German sheepdog and the cliché picture of Jews is that they are the ones making music Here the cheerful faces of the SS men and women are in sharp contrast to the anxious faces of my father and his sisters and brothers. 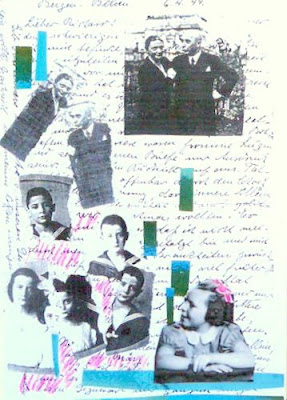 4.My grandmothers farewell letter from Bergen-Belsen  and a fractured family. Torn by the diaspora, torn by the loss of parents, torn apart because some of them no longer wanted to know of their Jewish background and even changed their surnames to non-Jewish surnames. A picture of my grandparents then, when everything was still good.